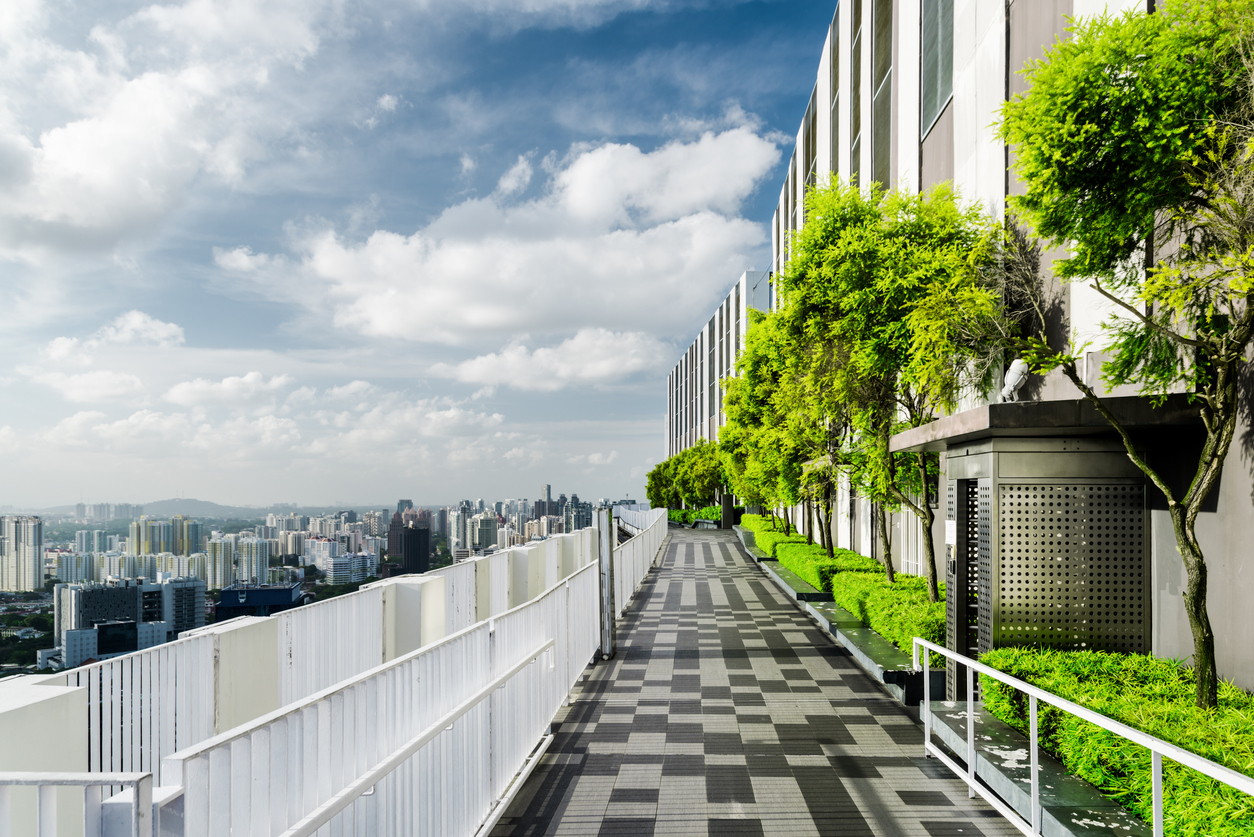 Although green roofs have been around for many decades, they’ve only recently started becoming popular in North America. And with that increasing popularity, a lot of misconceptions and myths have emerged regarding the installation, maintenance, and cost of green roof planning and long-term care.

Also known as living roofs, ecoroofs, and vegetated roofs, there are a lot of reasons why people relish in having access to a green roof. Aside from the fact that they add environmental biodiversity to even the most urban living spaces, green roofs also provide many residential building tenants with a quiet, safe, and stunning get-away from their sometimes overwhelmingly fast-paced and busy lives. Having a beautiful, serene, and seemingly remote spot in the city to retreat to can help reduce stress levels and even help manage anxiety.

Vegetation included in green roofs can also prevent cities from overheating by absorbing heat produced by ultraviolet rays from the sun and using it as an energy source. During this process, water is evaporated from plant leaves, which in turn cools down the air. This is known as evapotranspiration.

Now that you know why green roofs are so beneficial to our fragile urban ecosystem, it’s time to put a few rumours to rest. We’ve debunked some of the most prominent myths and misconceptions about green roofs and how they work.

Myth #1: Green Roofs Can Be Installed by Just About Anyone

Unfortunately, this couldn’t be further from the truth. Not only do green roof installations take a great deal of design preparation and forethought, but you need to make sure that your building is structurally sound enough to support the weight and specifications of a green roof. The property needs to be thoroughly analyzed and inspected to ensure that all of the proper precautions (i.e. a durable water membrane, irrigation system, and insulation) are in place before you can even think about planting greenery on the roof. It’s better to hire expert landscapers to do it for you.

Once again, this is a common misconception that doesn’t really hold any water (pun intended). Any poorly constructed roof—whether it’s a green roof or a traditional black tar roof—is susceptible to leaking and water damage. If the roof isn’t structurally sound or constructed of the appropriate building materials needed for the climate of city in which it’s located, then the chances of leaking are always higher. As long as the building is well designed and constructed, then there’s no reason why leaking should be an issue. In reality, green roofs could actually be instrumental in preventing leaks because the greenery absorbs most of the water that’s produced from rainfalls, melted snow, and the irrigation system.

That’s like saying that you never have to water your front or backyard garden because they’re outside. Just like a brand new garden space that’s located on ground level, a new green roof needs to be watered regularly to allow the plants to take root. Once the plants are rooted, you can reduce the frequency with which you water them, but that doesn’t mean you should just leave it up to nature to provide moisture. When it comes to designing a green roof, it’s advised that you select plants that are not only native to your region, but that can also withstand temperatures and wind resistance at higher altitudes. Research the frequency with which certain plants need to be watered as well as how much sunlight they require. That’ll also help you determine the proper placement and layout for your greenery as some plants might need less sunlight than others.

Myth #4: Green Roofs Weigh Too Much

If a green roof is part of the building plan from the get-go, then designers and architects have already taken the weight of it into account. Even if the green roof wasn’t part of the initial construction, modern roofs are designed to withstand heavy loads from rain and snowfalls anyway. To add a green roof to existing structures, you just need to make sure that you have the building inspected beforehand to ensure it can handle the additional weight. Most likely, all you have to do is reinforce the structure to account for the additional weight from the green roof.

There’s actually some truth to this myth. Green roofs do provide some natural insulation and help control the temperature of the building in the summer and winter months. As mentioned, the plants absorb the majority of the heat produced from the sun, which can reduce energy consumption in the building. In turn, they also help retain some of that heat in winter to regulate the internal temperatures. However, internal insulation is needed as additional reinforcement to help sustain the structure of the roof and the intensive or extensive garden it supports.

As long as the structure is strong and properly constructed, a green roof can be installed on pretty much any rooftop. Some might even argue that installing a green roof actually makes the building eco-friendly almost by default because of the added biodiversity, the natural insulation provided, and the reduction in energy consumption.

Myth #7: Green Roofs Are Difficult and Expensive to Maintain

Once you overcome the initial installation costs, paying the landscapers, and extra maintenance required in the beginning, green roofs are actually pretty cost-efficient and easy to care for. Depending on the types of plants you have, you might not even need to water them frequently. Plus, green roofs have been known to reduce energy costs in the long run, so you might even be saving yourself money in the future.

Green roofs and solar panels actually have a cohesive functionality when paired together. Since plants from the garden absorb a lot of natural energy, solar panels can function more efficiently by storing larger amounts of excess energy away until it’s needed.

Are you thinking of installing a green roof for your residential or commercial building? The green roof planning experts at FOREVER GREEN LAWN & LANDSCAPE INC. can help you with the design, construction, and maintenance of your rooftop garden. Contact us today for a free consultation!

https://forevergreeninc.ca/8-myths-green-roofs/ 8 Myths about Green Roofs Alex Lopez Forever Green Lawn and Landscape Inc 2019-07-15T10:06:37Z 2022-05-04 11:47:53 There are a lot of myths and misconceptions about green roof planning, installation, and maintenance. We’ve debunked a few of them here. Landscaping https://forevergreeninc.ca/wp-content/uploads/2016/11/ForeverGreen_logo.jpg